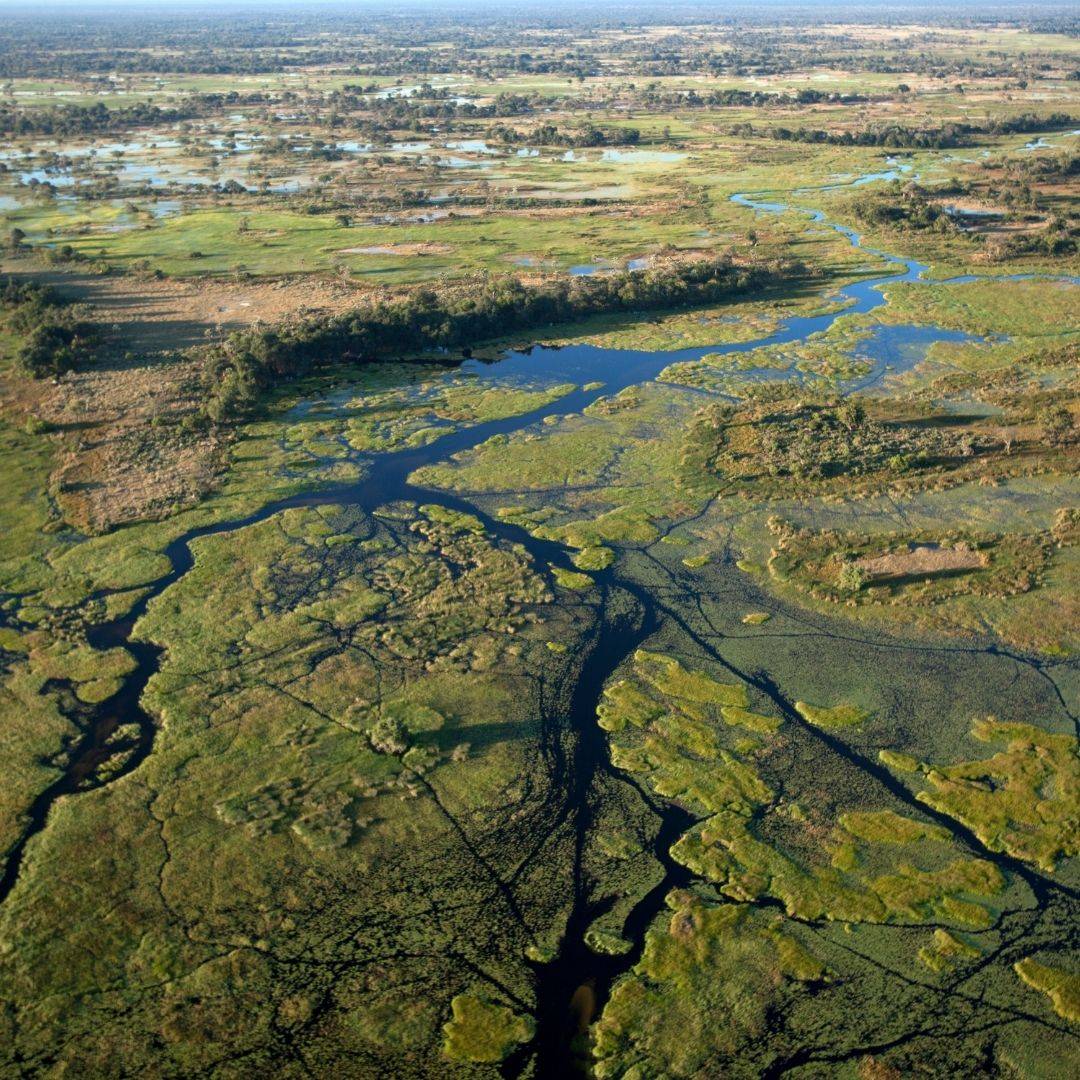 Home
/
Botswana
/
Save the Okavango

“A river rises in mountains and dies in sand and in its dying gives birth to a jewel at the edge of the Kalahari: the Okavango Delta.”  Frans Lanting, nature photographer.

The Okavango is a biodiversity hotspot, its landscape shaped by water, wildlife existing with seasonal ebbs and flows. Being almost fully occupied by the Kalahari Desert, Botswana is dry, and the yearly floods are a much-anticipated key to survival. Each year, the flooding increases the wetland to almost double the size – from around 3100 km sq to 7700 km sq. The water travels down from its source in Angola, flowing through Namibia and eventually settling in Botswana to form the delta. This floodwater creates a variety of habitats; islands, forests, marshes, lagoons, woodlands and floodplains.

Such diversity of ecosystem attracts a wealth of life, from insects to reptiles, fish, birds and mammals. It is one of the few inland water deltas in the world, nourishing expansive wildlife populations which depend upon its mosaic of land and water. Not only is it the life source for animals, but the area connects ancient migratory corridors which allow wildlife to move freely in search of food, depending on the season. Supporting the world’s largest population of elephants, as well as other prime mammals such as lion, leopard, cheetah and the endangered rhino, it is an undeniable species stronghold, and essential to protect.

The Okavango Delta’s future is currently at risk. Otherwise known as the ‘natural beating heart of Africa’, the UNESCO world heritage site is being targeted by a Canadian oil company called Reconnaissance Energy Africa. Unfortunately, it has been granted licenses for exploratory drilling, the effects potentially devastating to the delta’s ecosystem. ReconAfrica is after oil, believing this area could hold the last giant onshore oil find, seemingly willing to exploit both humans and wildlife for their enterprise. The test drilling begins in Namibia’s Kavango basin, the area bordering the main river that feeds the Botswana delta for around 170 miles. As Sky News reports, they have promoted the endeavour as one that will transform the Namibian economy, making it one of the wealthiest countries in the world.

Development alone includes pipelines, pumping stations and roads, resulting in habitat fragmentation. Then there are the consequences of water pollution as well as water supply to the local communities, and through to the delta itself. It appears that the conducted Environmental Impact Assessment (EIA) did not sufficiently address the long term impact on people or nature. A recent investigation by National Geographic shows that ReconAfrica’s test drills are already leaking contamination.

“Viewed from low orbit above the African continent, the Okavango Delta shows up as a bright bluish-green alluvial fan carved into northern Botswana. For thousands of kilometres, watery fingers reach across the Okavango Basin before disappearing into Kalahari sands—a glittering hand gripping one of Africa’s driest regions, bringing with it a liquid gift that sustains a wilderness largely unscathed by destructive development”.

This ‘liquid gift’ is the life source for wildlife as well as human settlements along the way. These pockets of civilization rely on the revenue from the tourism industry. More than 10 % of Botswana’s income relies on tourism (Botswana Tourism Industry Report), from travellers who wish to view the jewel of the Kalahari. Botswana is at the forefront of eco-tourism in Africa, striving to keep its footprint in the wild to a minimum. Responsible travel is encouraged through the implementation of the ‘Botswana Ecotourism Certification System’, designed to educate and promote ethical travel to tourism businesses, ensuring long term preservation.

Fortunately, the Okavango has a passionate support team of scientists, journalists, conservationists, NGO’s and nature lovers on its side – the world fighting for its survival. There are a number of expeditions that have been launched to collect data on how development influences the quality of the water, and therefore the ecosystems that depend on it. The National Geographic Okavango Wilderness Project aims to distribute conservation education through their research of wildlife numbers, new species and how they rely on good quality water. The mining company De Beers has also joined forces with National Geographic launching a project called Okavango Eternal, alongside their own initiative Building Forever, hoping to provide sustainable solutions. The delta is also protected by Ramsar, a treaty that protects the world’s wetlands. Despite all this, ReconAfrica was still granted the license to look for oil and gas in the region, allegedly misleading investors by omitting critical information. Reports by National Geographic have launched a call for “a thorough and coordinated investigation” by the United States Congress.

The Duke of Sussex, Prince Harry, founder of the Archewell Foundation, has stepped in with a plea to preserve this “magnificent last Eden’. Wildlife and conservation advocates stand beside the prince in a call for the world to stand in unity, signing a global petition to protect the Okavango Basin. The area is at risk of being destroyed for human financial gain, a greed that does not equal the benefits to the local wildlife and people.

The Okavango Delta is a wilderness ecosystem at its best and would be heartbreaking if it disappeared due to human development. The active conservation organisation, Re:wild stands with Namibia and Botswana in an effort to create awareness and a fighting chance for our wild spaces. Head to the Re:Wild #SavetheOkavango page dedicated to the cause with updated information along with the option of signing a petition.

Be a part of the change, spread awareness, save and protect the Okavango Delta; save our wilderness. 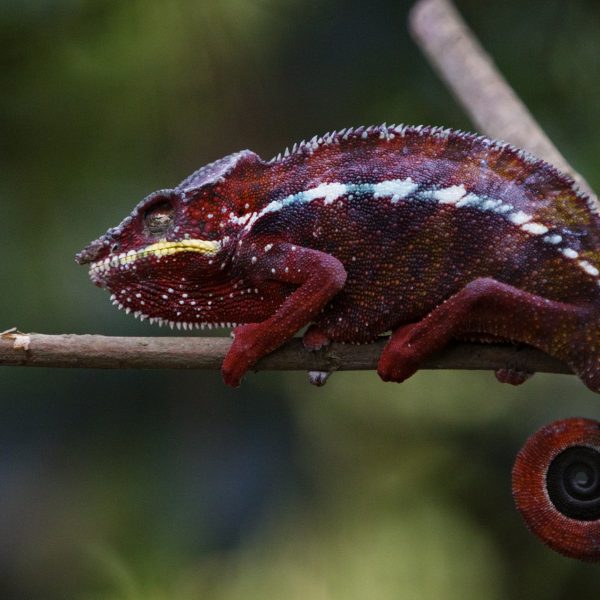 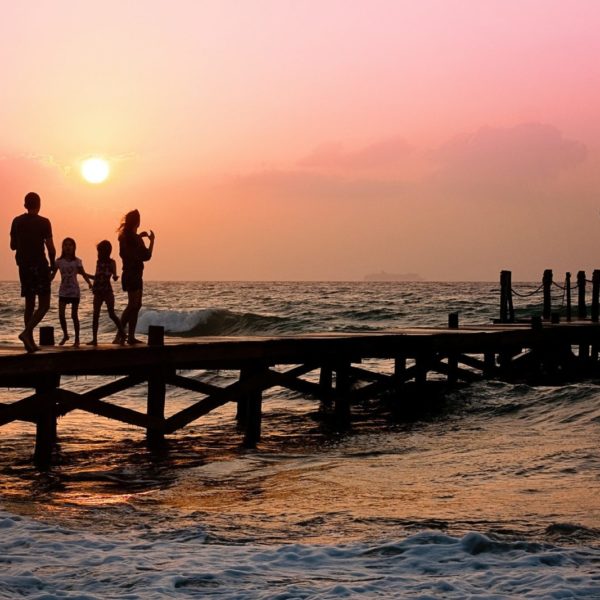 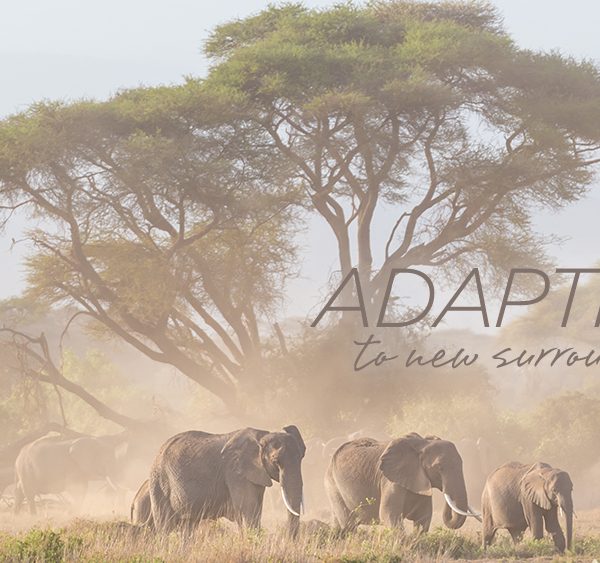