Experience Madagascar’s varied habitats during this journey which takes you from the waterfalls and lakes of Montagne d’Ambre National Park to the underground caves and limestone ‘tsingy’ of Ankarana Reserve, before enjoying the tropical beaches of Nosy Be. Throughout your stay you will have the opportunity to encounter a multitude of animals, most of which are endemic to Madagascar.

Private lodge tour, which takes you from the waterfalls and lakes of Montagne d’Ambre National Park to the underground caves of Northern Madagascar while staying at the luxurious Ankarana Lodge and Ravintsara Wellness Hotel. Starting and ending in Antananarivo – 8 Days

Antananarivo – Antananarivo is Madagascar’s bustling and boisterous capital city. Affectionately known as “Tana” it is the entry and exit point for most visitors to the country. It’s a great a place to learn more about Madagascar’s history with visits to the Queen’s palace and the Royal Hills of Ambohimanga, which can be explored on a cycle tour.

Montagne d’Ambre National Park – Montagne D’ambre National Park (Amber Mountain National Park) in northern Madagascar is located 35 km from Diégo, in the Antsiranana province, and 1000 km from the capital city. Wander through isolated montane rainforest of 18,200 hectares at an altitude ranging between 800 and 1.475 metres.

Ankarana National Park – Lemurs might be Madagascar’s biggest draw card, but cave-dwelling crocodiles makes Ankarana National Park exceptional. The Ankarana reserve boasts limestone caves, forest-filled canyons and a network of underground rivers. It is said to have the highest density of primates of any forest in the world such as big, green, leaf-tailed geckos, the world’s only known cave-dwelling crocodiles, a good mix of lemur species, and the night active lepilemurs in tree cavities.

Nosy Be – With an area of 321 km2, Nosy Be (‘Big Island’) is the largest of Madagascar’s offshore islands. It’s often billed in tourist brochures as the ‘Ile aux Parfums’ and, like the nearby Comoros islands, is a centre for the production of perfume essence from the ylang-ylang tree. Other island products include sugar cane, coffee, vanilla, pepper, saffron and other spices – making the markets in Nosy Be fantastic and rich with bargains!

The Superior Package includes accommodation at the following locations:

Vehicles: Transport will be in an appropriate 2x 4 vehicle.

Meals: Please advise us of any special dietary requirements in advance.

Visas: A visa is required to enter the territory of Madagascar and can easily be obtained upon arrival at the airport of Antananarivo with a validity of up to 90 days. Tourists staying for less than one month, can purchase a visa for 115’000 Ariary (around 35 €). Paying with the exact amounts or small currency is advised. No photographs are required, however please ensure that passports are valid for at least 6 months after return date.

Travel Insurance: Please note that travel and cancellation insurance is mandatory for every guest travelling with Jenman Madagascar Safaris. All insurance is solely the responsibility of our guests. Please ensure you arrange your own insurance with protection for the full duration of your journey to cover personal injury, damage and loss of personal items including but not limited to camera equipment and other electronic items, medical expenses, repatriation expenses and loss of luggage, etc. Please speak to your travel agent if you require assistance.

Making your Travels Meaningful: The Grow Africa Foundation (163-738 NPO) is the responsible tourism initiative started by Jenman African Safaris and Hideaways. The focus of Grow Africa is to make a positive impact on the environment, society and economy in the places we travel to. We do this by instigating and supporting local social and environmental projects. 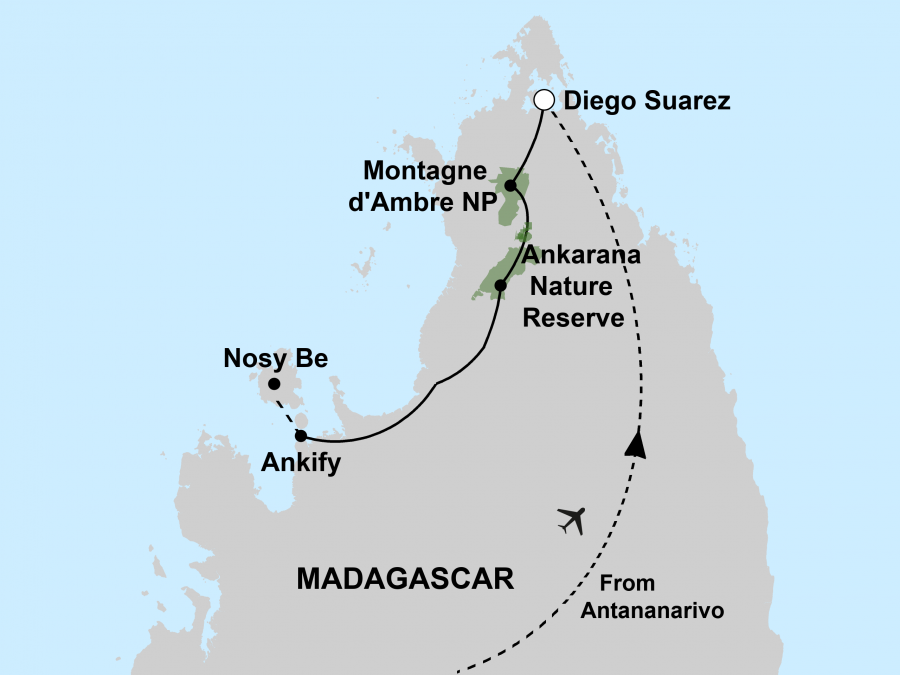 You will be met at the airport and transferred to your hotel in Antananarivo, the picturesque capital of Madagascar. With its bustling markets, friendly people and ancient town on a hill with freestone churches and ancient royal places, it is unique among the world’s other capitals.

You will be transferred to the airport for your flight to Diego Suarez, where you will be collected at the airport. We then drive directly to Montagne d’Ambre National Park, which covers 18,200 ha of a prominent volcanic massif and with its striking scenery, rainforest and waterfalls, it is one of Madagascar’s most visited natural attractions. It was created in 1958 to protect the massif and its ecosystems, including the region’s unique flora and fauna. We arrive in the late afternoon. The next day is spent exploring the park on foot. In the park you will have the chance to see seven species of lemurs, the ring-tailed mongoose and a variety of reptiles including frogs, geckos and chameleons, as well as more than 70 species of birds.

Today we head to Ankarana – a nature reserve with karst pinnacles, sacred caves, underground rivers and beautiful scenery. The rich and diverse flora and fauna includes many lemurs and interesting bird species. Its limestone pinnacles are called tsingy formations. Running through and under the tsingy are hidden forest-filled canyons and numerous subterranean rivers. We will explore the extensive cave system, which includes several fascinating bat-filled grottoes.

Today we will have a full day to visit the Ankarana nature reserve, where once again you will have the chance to admire the remarkably rich and varied vegetation and the abundant wildlife of the reserve.

Today we drive to Ankify – a small village situated along a white sand beach. From here we will go on a boat transfer to Nosy Be where you will be transferred by car to your hotel.
Nosy Be, commonly known as “the island of perfumes” and the largest of Madagascar’s offshore islands, is a beautiful tropical island covered with palm trees and bougainvillea. Nosy Be is a beautiful place where you could easily spend the entire day simply watching the changing hues of blue in the sea and the sky. In addition to its attractive beaches, the island’s assets include luxuriant foliage, friendly people and a relaxed Indian Ocean ambience.

This day in Nosy Be is at leisure. The following optional activities is available. Visit the Lokobe Reserve, a rainforest reserve that protects most of Nosy Be’s endemic vegetation. You might see lemurs, birds and chameleons. Or go on a day-cruise to the islands “Nosy Komba”- the island of lemurs or “Nosy Tanikely”- an underwater reserve offering a rich diversity of marine life, such as beautiful corals and a big variety of fish, with excellent diving and snorkelling opportunities. Fish you might see include surgeonfish, clown fish, barracuda, manta rays, sea urchins, starfish, eels, anemones and many more. At the end of the afternoon we will go back to the hotel where you will have the chance to enjoy the amenities on offer.

Today you will be transferred to the airport for your flight back to Antananarivo to connect with your flight home. We hope to welcome you in Madagascar again very soon!

This website uses cookies to improve your experience while you navigate through the website. Out of these, the cookies that are categorized as necessary are stored on your browser as they are essential for the working of basic functionalities of the website. We also use third-party cookies that help us analyze and understand how you use this website. These cookies will be stored in your browser only with your consent. You also have the option to opt-out of these cookies. But opting out of some of these cookies may affect your browsing experience.
Necessary Always Enabled