Immerse yourself in the real-world splendor of the legendary Lion King film by exploring the iconic landscapes that inspired this classic Disney film. Starting in Nairobi, Kenya,  across the earth’s equator, traverse wide open plains teeming with wildlife, discover the call of the wild in some of Africa’s most pristine wildernesses, and connect to the cultural heartbeat of Africa. Kids can follow in Simba’s footsteps and become honorary rangers as they learn about this remarkable land and the circle of life. Then wind your way through the lake region, down the Great Rift Valley and into the Masai Mara – the breathtaking inspiration behind the famed Pride Lands, and understand first hand why this unrivaled landscape captured the hearts of millions!

A family safari following the journey of “The Lion King” starting and ending in Nairobi, Kenya – 10 days.

Nairobi – The vibrant and exciting capital of Kenya is also the 4th largest city in Africa. In addition to its cosmopolitan urban jungle, a large, wildlife-abundant game reserve sits right on its doorstep. Nairobi National Park is well-known for its rhinos, leopards, lions, buffalo, as well as large populations of giraffe, wildebeest, eland and Thompson’s gazelle.

Ol Pejeta Conservancy – Apart from the Masai Mara, the Ol Pejeta Conservancy has the highest density of wildlife in Kenya. Situated on the equator west of Nanyuki, it holds the honour of being the largest sanctuary for endangered black rhinos in East Africa and is the only place in the whole of Kenya to see cheeky chimpanzees.

Lake Nakuru National Park – The majestic Lake Nakuru lies in Kenya’s Rift Valley and is elevated 1754 metres above sea level. A highly protected area, the lake is a breeding ground for one of the largest concentrations of flamingos in the world, and is also one of the few areas in East Africa that is home to both the white and black rhinos.

Lake Naivasha – This freshwater lake in lies north west of Nairobi, and is a popular highlight when going on safari in the area. Full of hippos and surrounded by papyrus, this beautiful lake also has excellent birdlife and even an island shaped in a crescent where it’s possible to walk with wildlife.

Masai Mara – The legendary Masai Mara together with Tanzania’s Serengeti form one of Africa’s most well-known wildlife areas. The connection of the two allows for massive herds of wildebeest to move freely between the parks during the Great Migration. The region is also widely known for its indigenous herders, the beautifully beaded and red-robed Masaai people; and of course the Big Five. 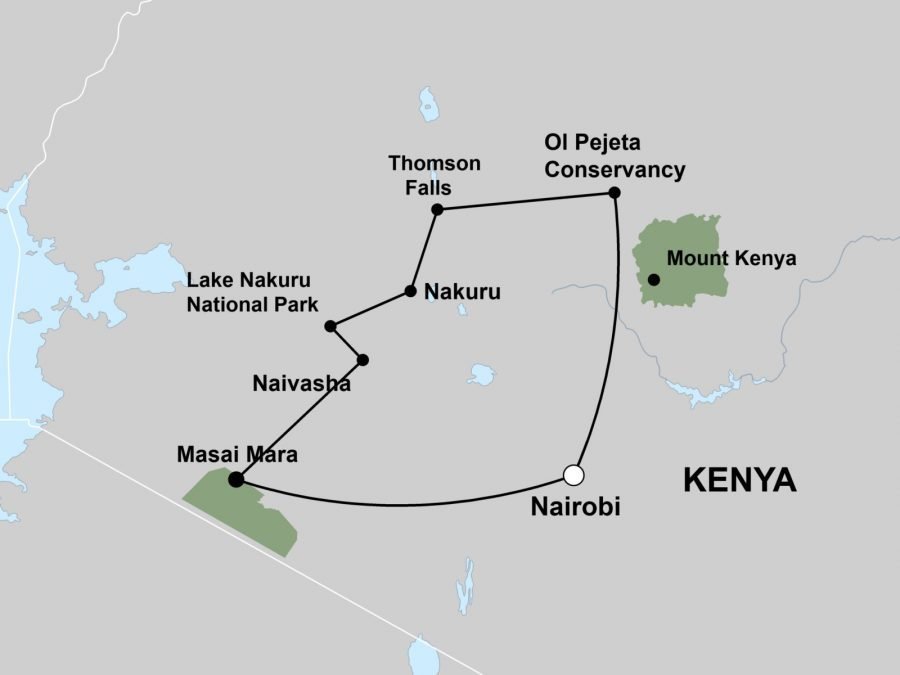 Upon arrival at Jomo Kenyatta International Airport you will be transferred to your accommodation in the thriving metropolis of Nairobi. Depending on your time of arrival, a variety of additional activities can be organised.

After breakfast, start the day off with a Nairobi City tour. Our first stop is the Kazuri Bead Factory, a social enterprise established in 1975 as a project to assist single mothers make a living. Next, we head to the Giraffe Centre where you can learn about the endangered Rothschild Giraffe and experience an up close and personal encounter. After lunch we head to the Sheldrick Elephant Orphanage for a special behind-the-scenes, foster parent visit where we get to meet the young orphaned elephants as they come in from the day. After the elephants retire, we return to our accommodation for the evening.

After breakfast, you are met by your safari guide and then set out north, making your way across the fertile lands of Thika – found on the slopes of Mount Kenya. The drive also takes us across the equator where we will stop to capture this special moment before arriving at the Ol Pejeta Conservancy. On arrival, enjoy a hot lunch before heading out for afternoon game drive in the reserve.

Become a ranger for the day and assist the Ol Pejeta conservation team. You will be given a workbook of various activities and questions to solve throughout the day as we enjoy a game drive and a visit to the chimpanzee sanctuary. At the end of the day, meet one of the Tourism Rangers at the Morani Information Centre – they will review your data collection, administer the ranger oath, and present kids with a ranger hat and honorary certificate.

After breakfast, savour a short game drive as we leave Ol Pejeta and make our way to the lake region of Kenya. The winding road takes us back and forth across the equator multiple times. We stop for lunch and pay a visit to the Thomson’s Falls. Then, we continue to Lake Nakuru National Park and upon arrival, set out for a game drive.

After completing our exploration of Lake Nakuru and its wildlife in the morning, we then continue down the Great Rift Valley to Lake Naivasha – one of the few freshwater lakes found in the Rift Valley. Enjoy a boat excursion on the lake before a guided walking safari on Crescent Island.

Continue south into Maasai Country where we find the world-famous Masai Mara – the inspiration behind the Lion King film. Masai Mara National Park is one of the most exciting parks in Kenya, hosting the annual wildebeest migration where more than 1.5 million wildebeest and some half a million zebra make their way into the park from the Serengeti. The park is also known for its wide variety of other wildlife, and is a great place to spot lion and cheetah. The next day, enjoy game drives exploring the grassy plains and rolling hills with the famous Acacia trees and excellent sightings.

After breakfast and a final morning game drive we make our way back across the Great Rift Valley and up the Escarpment, returning to the bustling city of Nairobi.