My son Shabbeer has always been a traveller at heart but had yet to experience a proper trip.

A safari in particular has been a dream of his, specifically; he desperately wanted to see a male lion. Everything was exciting for him, just walking into the airport was exciting, the line-up to check our bags was exciting, even the dreaded security was exciting.

He’s always talked about becoming a pilot so to actually be on a flight was extraordinarily exciting. I pre-booked our seats to make sure he got a window and as the engine revved up and we soared through the clouds he was speechless, mesmerised by the view of beautiful Cape Town below.

I have flown many times in my life, to the point where it has become a chore but seeing his excitement reminded me of how amazing it actually is to be like a bird and travel across vast distances in a brief period of time.

We spent a whole week in Kruger and our last stop was the Shiduli lodge in the Karongwe Game Reserve. Although we had seen many animals up to that point, including all of the big five: leopard, buffalo, elephant, rhino and lion, we only saw female lions so the famous mane of the King eluded us.

The Shiduli lodge itself was beautiful. Our room had leaves spelling “Welcome” on our comfortable beds. Little chocolates rested on our pillows. He jumps on the bed and I take a picture, he’s spoiled now.

There were several communal areas in the large garden including couches dotted throughout the grounds where you can have a rest, a chat, or play some of the board games they have on offer. We arrived in the early afternoon and had some time to rest before our first game drive so we played his new favourite game, scrabble. All of the staff greeted us warmly and we were offered something cool to drink on this very hot day. Although this is winter, the weather is quite warm during the day with cool mornings and evenings.

After the game, we headed for lunch which offered a choice from an a la carte menu. Service was lovely as was the food….and now it was finally time for the main event, our continued search for the male lion!

We head to the pickup spot where we were greeted by our field guide named ‘Respect’ and our tracker. “Please help us find male lions” Shabbeer said. Desperate, there’s only 2 game drives left, we must see one before we go! The guide nodded and knew he was on a mission.

Driving though their vast reserve which consists of 9500 hectares of land, you really feel that you are in the bush, there are no paved roads here. We viewed many animals on that drive and the information given to us about the habits of each species was fascinating. Many people think a safari is just to see the animals quickly and get a picture but the game viewing is actually very informative and gives you a new respect for the creatures we share this planet with.

My son had listened carefully throughout the trip and Respect quizzed him on his knowledge and of course added to it. For instance, did you know that cheetah does not like getting injured in fights and therefore avoids confrontation? Their usual prey is smaller animals that are easier to hunt. They like small warthogs but are frightened of the mother. Yes, a cheetah is scared of a warthog.

Speaking of cheetahs, while I personally have been on many game drives in different parts of Southern Africa, I had yet to see a cheetah and that was my personal request. I wasn’t holding my breath.

Suddenly, Respect hears something over his radio and starts driving in a determined direction. “What is it?” I asked. “It’s a surprise”. After about 10 minutes he stops the vehicle and asks us to hop out. I’m a little weary of this but he insists it’s safe and all is well, it’s the only way to see these particular animals as they are too far into the bush.

We walk for not even 5 minutes and there they are; 2 male cheetahs, brothers actually, having a snooze, side by side. My son was thrilled but we had to remain very quiet. These cheetahs were born and raised on this reserve and are very docile. They are comfortable with humans as long as we keep our distance, which of course we did. I stood there in awe taking many photos.

We were lucky we came in July as it is a perfect time of year to travel to Kruger because their winter is dry which makes the animals come out searching for waterholes. Also the bush isn’t as thick so they can’t hide as well. At the next stop, we saw a leopard, leopards are extremely elusive and I know several people who have been on game drives for years without seeing one. In Karongwe, we saw two!

But still no male lion. After our game drive, when the stars came out, we freshened up and enjoyed a wonderful 4 course dinner. We chatted with a family from England who had just landed that day and were very excited at that their Kruger experience was about to begin. One thing about travelling to game lodges that one might not speak of so much is the travellers you get to meet from all over the world. It’s a very intimate experience and everyone loves to share their game viewing moments. Shabbeer especially liked the Aussie family we met a few days earlier. The father was making fun of Shabbeer’s bright blue pants, he can often be quite sensitive when criticized but he knew this man was just messing with him and he loved chatting to him.

The following morning was our very last game drive and my son was losing hope. Our field guide had a sparkle in his eye and said that their lions had been spotted that morning and we were going to find them. 10 minutes into our game drive, we found them! 2 males and 4 females having a snooze that morning and Shabbeer literally had to close his mouth to keep himself from shouting in excitement. We stayed there for quite a while admiring them, watching them turn over, looking often like domestic cats in their movements. Every movement was exciting for him.

The rest of the game drive was also fabulous but nothing could compare to that long awaited sighting.

After breakfast it was sadly time to leave. We thanked the staff and as we drove off the manager waved goodbye.

Shabbeer is now spoiled. How will I ever top this??? 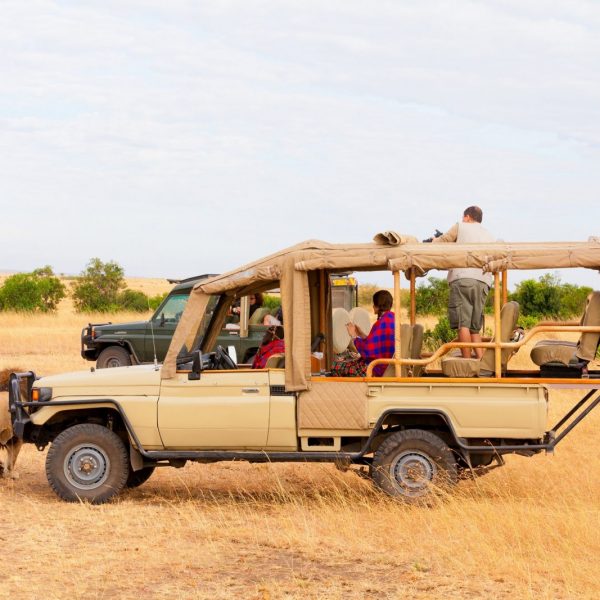 Mountains of the Mist

Trees so big you can live inside them!