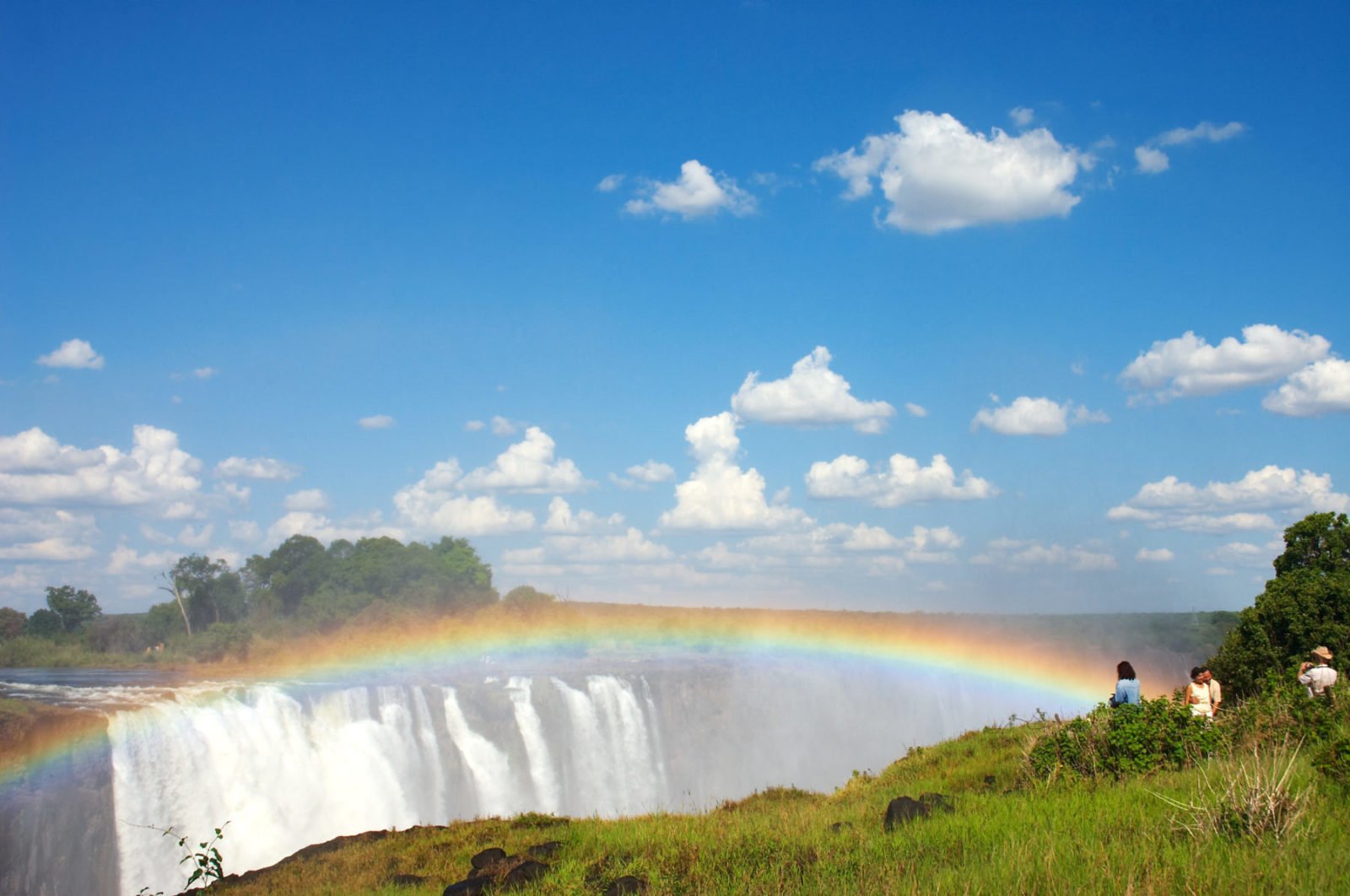 We arrived into Vic Falls airport with slight queues going through customs and immigration but all went well. We were met there by our driver from Stanley and Livingstone Safari Lodge and brought to Stanley and Livingstone which is a private reserve just outside of Vic Falls. They have all of the Big 5 which is quite a plus point for Zimbabwe. It’s an old style safari lodge, so quite colonial in style. The staff were a big highlight, they were phenomenal, including our guide Mike. The reserve has a reasonable amount of game, not teeming with game but he really made it come alive. Another highlight there is the black rhino, something you don’t often see or if you see then it’s just the back disappearing off into the bush. So was great to see them up close and hanging around. They have a rhino breeding project there. The rhinos are not quite tame but they are used to vehicles so don’t scurry off.

The following day we were picked up by our guide, Manuel, he was our Jenman guide and another highlight, because he was a super guide. Big fellow, gentle demeanour, a real gentle giant, full of knowledge, he accommodated everyone and got on with everyone, he was brilliant. Mike got us through to Botswana from Zimbabwe. From there we were picked up by the Chobe Water Villas boat and were transferred across the border on the river to the Namibian side and we stayed on the Namibian side of the Chobe River. Highlight of the Water Villas was that the accommodation is modern and quite stylish. Beautiful accommodation on the river, each room overlooks the water. In the first 5 minutes you see elephant and hippos from your deck. We did boat game “drives” or cruises, so water based game drives which were very exciting. You can see the elephants coming down to the water and playing in the water. Lots of crocodiles. Interesting hippo sightings, including two males who were fighting over their territory so we sat and observed that for a while. Another memorable thing was the elephants in the reeds, in the middle of the river are reed islands and the elephants are up to their bellies in water and we got the boat right up close and sat there watching them do their thing which was pretty awesome. In the evening there were beautiful sunsets, the light there is phenomenal.

Next day we went on a full day game drive right into Hwange National Park where we had awesome game viewing. You need to work a little bit harder to see or find the animals there but it’s well worth it. Our guide, Mash, tracked lion spoor for quite a while, he really went out of his way to find these lions. We came across 2 old buffalos, one with a scratch down his side who was pretty anxious and jumpy – he’d clearly been attacked by a lion so we know they were close. We continued tracking the spoor and eventually found them, being typical lions, sleeping under a tree. It was great of our guide to track them down. We also saw beautiful giraffe, a whole journey of giraffe interacting. One dirty old man giraffe trying to mate with a young lass who was having none of it, so there was a bit of chasing and fun. So that was a nice giraffe viewing. Then we finished the day with an elephant viewing down by the waterhole, there were literally hundreds of elephants coming and going and playing and splashing in the water and trumpeting, so we just stayed there for a long time watching that. We actually stayed so long we ended up getting back a bit later than planned but it all worked out ok. There is definitely really good game viewing in Hwange. Really good skies as well, beautiful light.

Then it was time to make our way back to the Victoria Falls, as we got back the first thing we did was have lunch at the Victoria Falls Bridge. After lunch we had a guided tour of the bridge which I wasn’t sure if would be very exciting but it actually was. The tour started with our guide who was dressed as one of the engineers from when the bridge was built over a hundred years ago. He gave us a quick talk about all the problems of building the bridge and who was involved etc. Then we had a walk on the bridge but not on the top, we went underneath and were hooked up with safety harnesses so that was quite interesting.

For the last leg of our trip we stayed at Ilala Lodge which is a very nice lodge in Victoriafälle, Simbabwe, perfect for what you need and ideal for a one or two-night stay. It’s very comfortable, with good food and good staff. In the evening we went out for dinner at the helipad, so it was dinner outside of the town in the open air. There was a big fire and a chef cooking out there for us, we actually had to pack up a bit early as there was a herd of elephants on its way, so no last after dinner drinks, but very exciting.