Madagascar is Africa’s largest island 450 km off the eastern coast of Mozambique. Its isolation from the mainland has resulted in a completely unique ecosystem, its plants and animals distinctive to the area.

Madagascar is a vibrant mixture of stylish and rustic, wearing its heart on its sleeve as it reveals its treasures and welcomes tourism to its shores. It is a country full of colour and character in people, wildlife and landscape. Confronted with its authenticity on arrival in the capital, Antananarivo, one is whisked away into the rhythm of Malagasy culture, setting the theme of curiosity for the rest of one’s Madagascan adventure.

September to December is the perfect time to visit, especially for a beach holiday. The cool, dry months, from May to October, are best for hiking. The months of April, May and September to November are peak viewing time for Madagascar’s weird and wonderful wildlife. This is Madagascar’s dry season, when the weather is good and nights are mild. January to mid April are the height of the wet season and are best avoided, many tourism businesses shutting their doors in February and March .

Best time for wildlife: The country’s iconic lemurs can be seen all year round but breeding generally occurs between October – December. Humpback whales can be seen off the coast in July and August. September to mid-December is best for birdwatching. 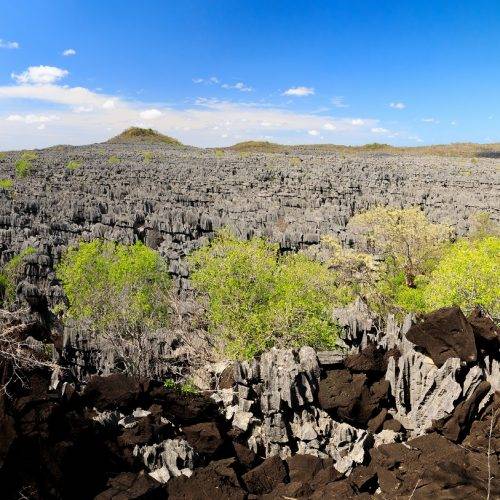 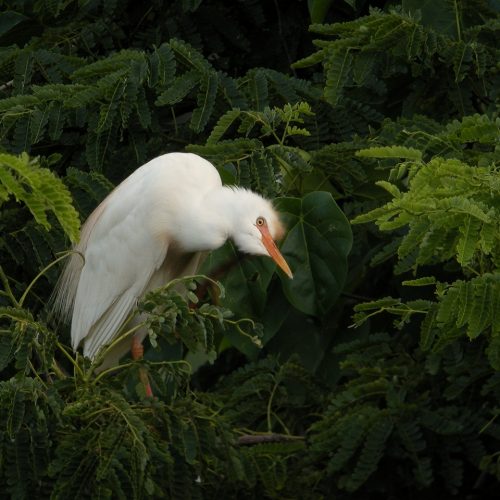 Known as the “realm of birds, land of sacred lakes, fount of life”, the area has a varied landscape. 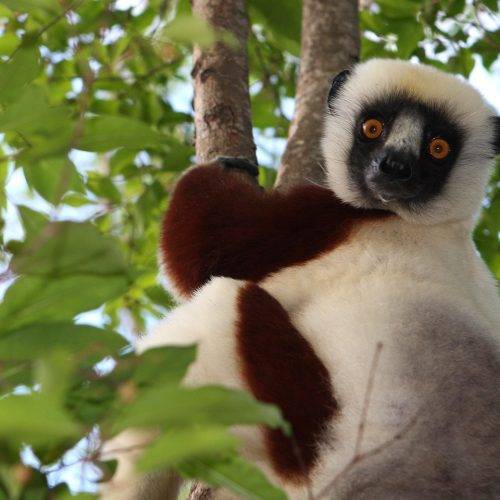 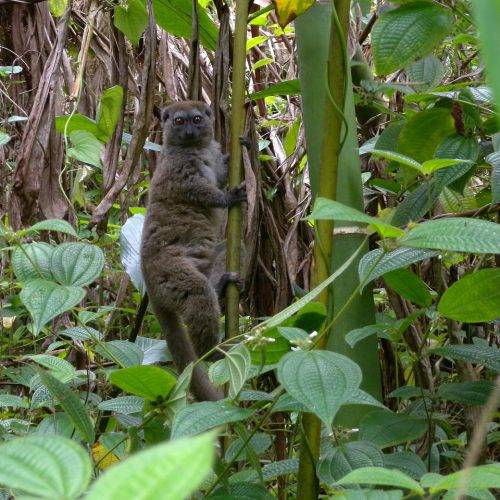 Marojejy is one of the most strikingly beautiful and wild areas of Madagascar. 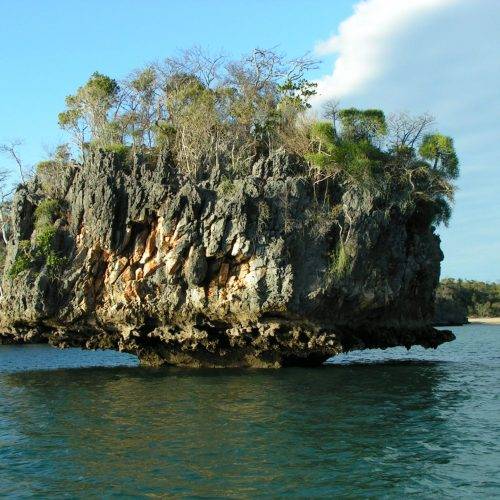 A sleepy fishing village sweetened with the aromas of coffee, vanilla and cloves. 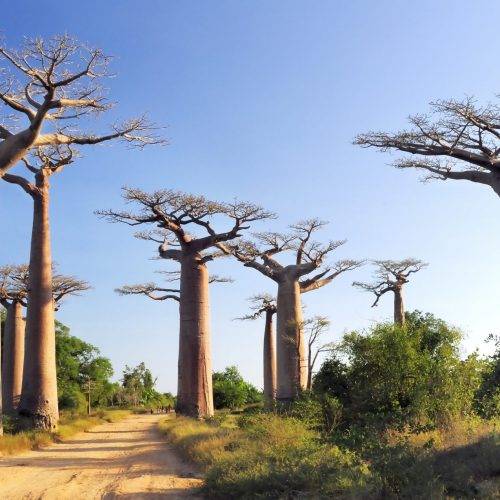 Walk beneath the ancient baobabs, known as “renilia” in Malagasy, meaning “Mother of the Forest”.

Morondava and The Avenue of Baobabs, Madagascar 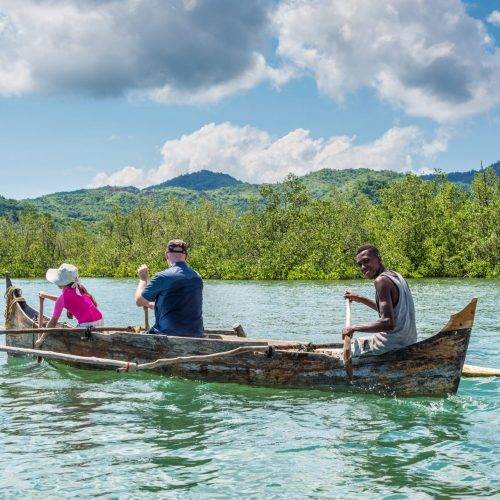 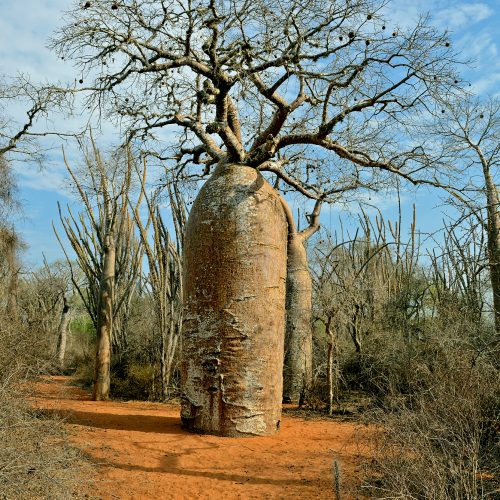 Peppered in palms and covered in white sand, the small fishing village is idyllic and relaxed. 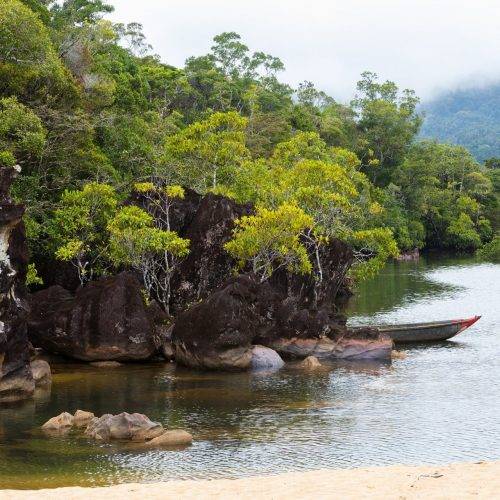 A sanctuary of the red ruffed lemur, the Madagascar day gecko and a host of chameleons. 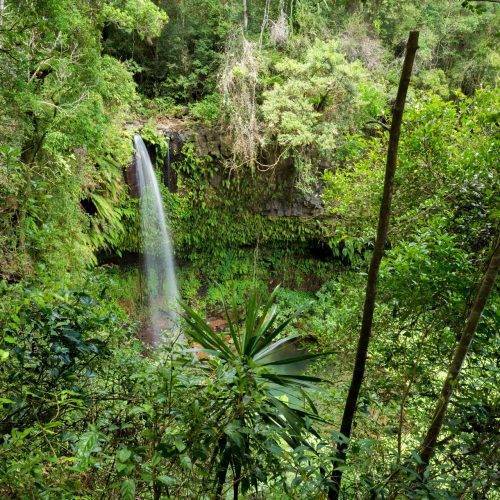 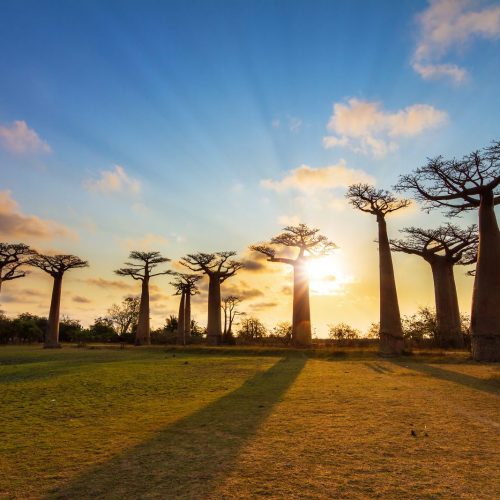 A picture-perfect phenomenon with rows of baobabs shooting up on either side of a natural path. 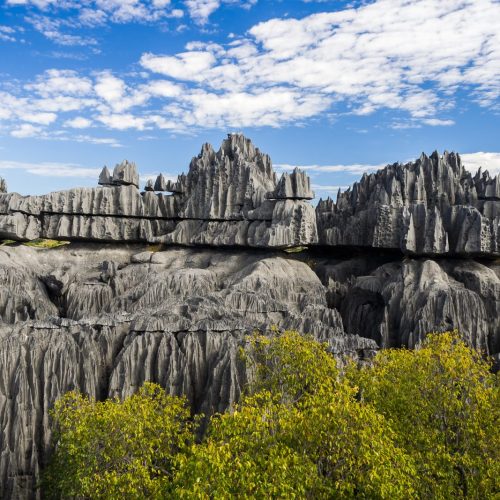 This hiking reserve is a landscape of towers, rifts and canyons forming limestone cathedrals.

A port city on the east coast with relics of old colonial buildings and roadside markets.

A long and thin strip of tropical beach and turquoise sea paradise in the heart of the Indian Ocean. 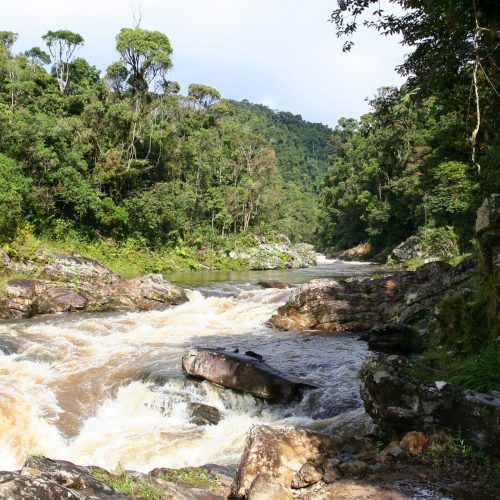 A healthy forest, set up to protect the golden bamboo lemur and the greater bamboo lemur.

Sweeping canyons dating back to the Jurassic period give the park a historical and ancient atmosphere.

Renowned for its production of wine and tea, it is the place to go to experience the island’s authentic beauty.

The city offers a springboard to the north of Madagascar – from nature to travelling with your taste buds.

‘Tana’ is the colourful and vibrant capital city of Madagascar, filled with loads of personality.

This conservancy is known for its population of Indri Lemurs, the largest living lemurs.

Travellers coming to Madagascar are often worried about their safety, health and the reputation of the tour operator they are travelling with. We answer the most Frequently Asked Questions (FAQ’s) here
Is Jenman African Safaris committed to responsible and sustainable tourism?

We recognise that the cultures, environments and economies that we visit can be fragile and require an ongoing commitment from us to ensure that we have a lasting positive effect. Tourism, when carried out in a responsible manner, can be a real help to local communities in providing income, positive cultural exchanges and the financial incentive to protect their natural environment. We run our safaris in keeping within ecotourism guidelines.

Is Madagascar a good destination for travelling with children?

Most lodges and hotels cater for families with children. We can advise and tailor-make tours that incorporate fun activities, best months to travel to avoid high temperatures and short travel distances suitable for children.

Should I go to Madagascar for my honeymoon?

Madagascar is becoming more popular for a honeymoon destination. The island offers all kinds of experiences whether you prefer to plan: a relaxing, romantic beach holiday; an adrenaline-filled adventure or a tour to photograph beautiful spaces, places and people – Madagascar has it all. We can tailor-make any experience for you.

What accommodation facilities can I expect in Madagascar?

Tourism in Madagascar is still very much in its infancy stage. Booking tours with Jenman African Safaris will ensure you will have a vacation with running water, flushing toilets, electricity (sometimes produced with a generator for a few hours and switched off at night for example from 11 PM to 6 AM), and hygienic and clean accommodation.

Tours are divided into classic, superior and exquisite so that you can choose which comfort and luxury level you require.

Luxury tents are also an option for accommodation at the Mandrare River Camp on the Barefoot Luxury Southern Explorer tour.

Currency
The official currency of Madagascar is the Malagasy Ariary (MGA). One Ariary (Ar) is divided into 5 iraimbilanja, which turns it into one of the two circulating currencies with a non-decimal division in the world.
There are banknotes of 10,000 MGA, 5,000 MGA, 2,000 MGA, 1,000 MGA, 500 MGA, 200 MGA and 100 MGA. There are even coins from 1 up to 50 Ar. The one of 50 Ar is very beautiful and has baobabs carved on it.
Banking
Banks are normally open from 08h00 to 12h00 and 14h00 to 15h30 on weekdays.
Credit cards (the most useful credit card is VISA CARD) are only accepted in large hotels, restaurants and some shops, mainly in Antananarivo. In the other big cities, you can get cash from Automatic Cash Machines (ATM) only with VISA CARDS. There’s now also an ATM at the airport in Antananarivo. Don’t rely on ATM machines only; they are often out of order. Keep some cash in Euro for emergencies.

Madagascar is a huge place, the roads can be bad and travel times long. Internal flights can be huge time-savers but can be expensive. Private vehicle and driver is a great alternative.
Due to the often difficult driving conditions, most rental agencies make hiring a driver compulsory with their vehicles. Driving in Madagascar is on the right-hand side. Police checkpoints are frequent.

Madagascar’s cuisine is traditionally based on rice, which is served with vegetables, meat and spicy seasoning. Malagasy enjoy very spicy food, therefore many dishes are prepared with hot peppers or any other spices. The dishes are usually flavoured with garlic, ginger, onion or curry. Desserts are flavoured with vanilla.
Drinking tap water isn’t recommended in Madagascar. For environmental reasons, try to avoid buying bottled water. Fill a reusable water bottle or canteen with filtered water. Most hotels have drinking water available. It’s also advisable to avoid ice in drinks and peel fruit and vegetables before eating.

The best time to travel in most areas is April and October/November. The coolest time to travel anywhere is during the dry season (May to October), but during this time the Hauts plateaux (central highlands; which include Antananarivo) can get cold and windy, with freezing showers.

January to March there is heavy rainfall in many areas and a high risk of cyclones in the east and northeast.  The west and southwest get searingly hot during summer, but the winter months in these regions are pleasant, with blue skies, cooler temperatures and little rain. Most rain in the northeast falls from July to September.
Average maximum temperatures vary from about 30°C in coastal areas (higher in summer) to around 25°C on the Hauts plateaux. In Antananarivo and other highland areas, temperatures during winter can drop to 10°C and even lower during the night.

To cope with the Madagascan climate, light material should be worn during the summer on high central plateaux and throughout the year in the north and south. Cotton and natural fibres work better in this sweaty weather. Warmer clothes are advised for during the evenings and winter in mountainous areas. Rainwear is advisable as a precaution.

Internet cafes are found in some of the larger cities like Antsirabe, Fianarantsoa and Antananarivo. Smaller towns and remote areas will have far less access, so prepare to disconnect when travelling out of urban centres.

In Madagascar, the two-pronged plug and the European standard socket are the most used with a tension of 220 volts (but it may go down to 170 volts in some areas at peak times) 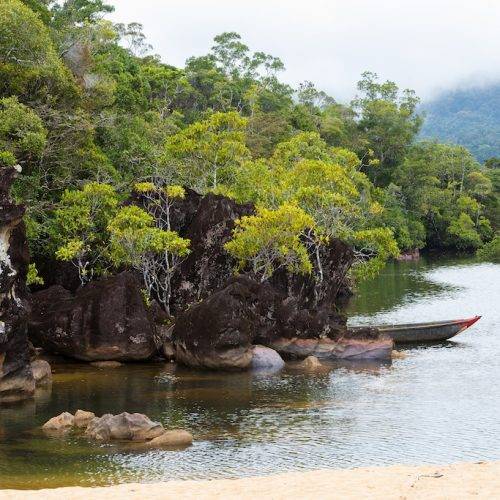 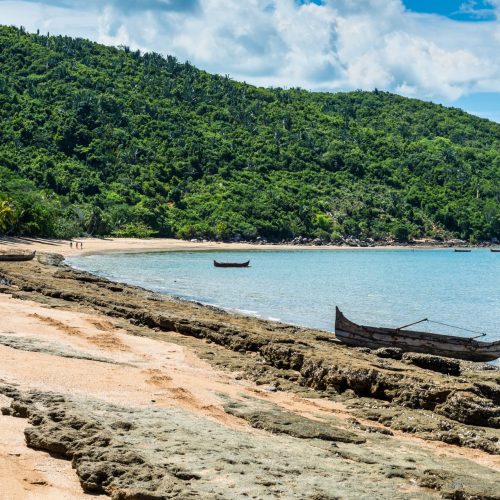 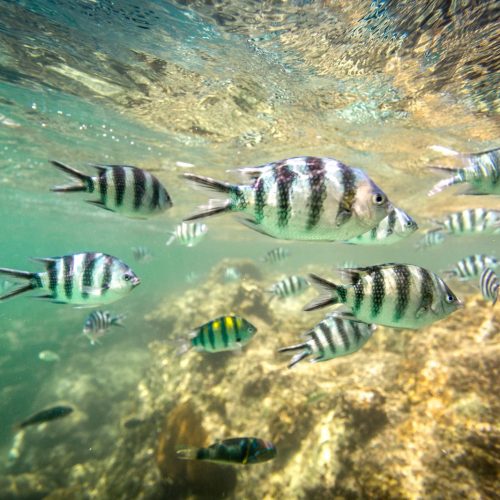 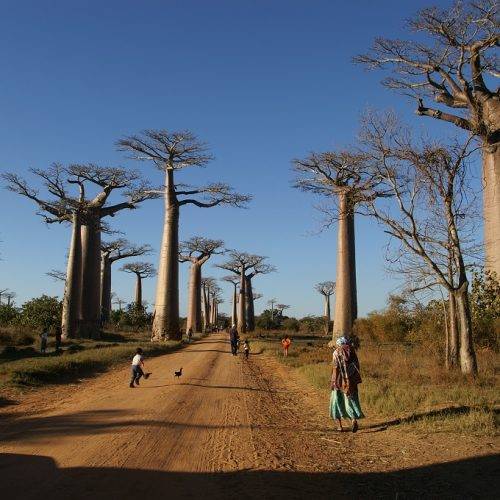 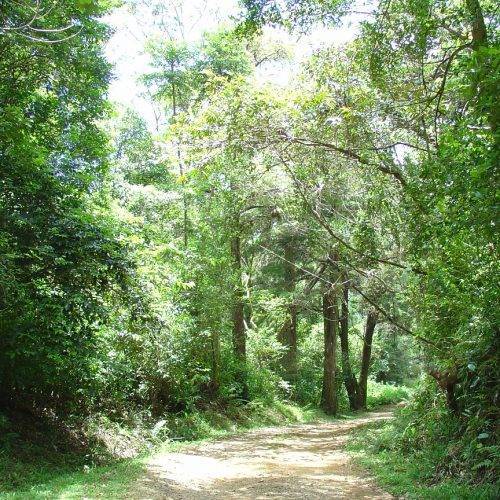 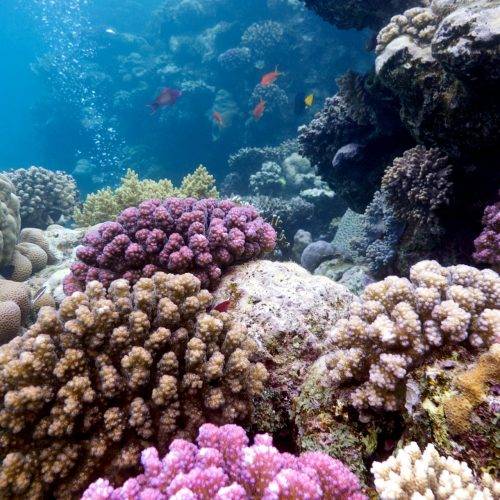 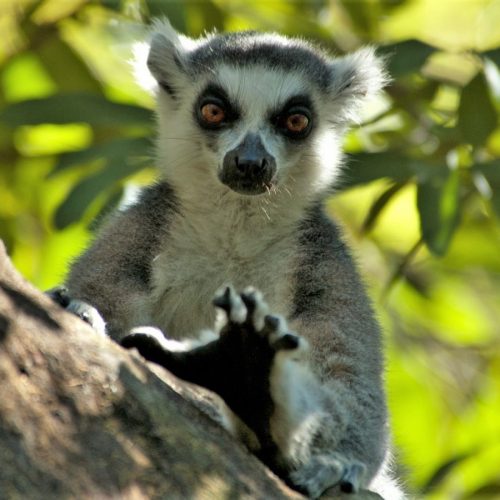 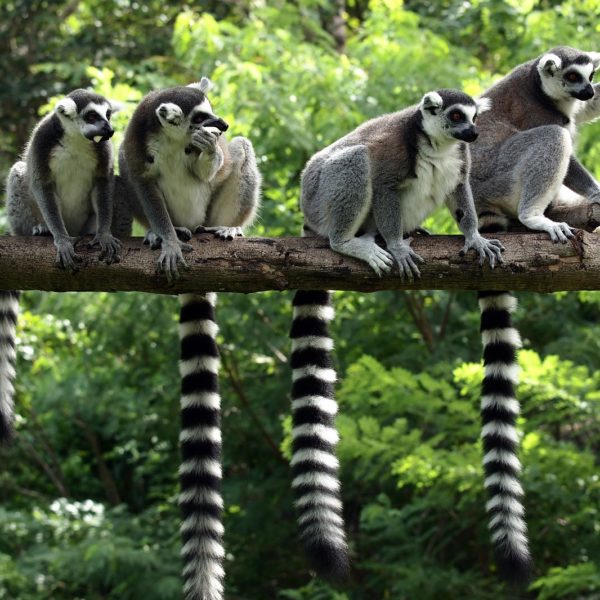 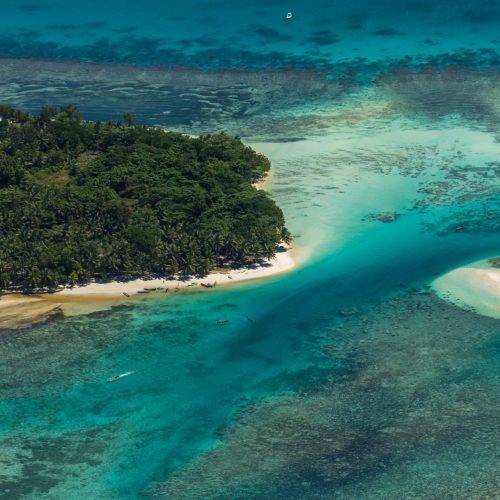